Last weekend, I went driving around the Puget Sound. I paid cash for a lot of things, which left me with a lot of pocket change. While I was getting ready for work on Monday, I decided to put all of this change in my bank.

I have a really nice “piggy bank,” which is an actual pig dressed like Superman. It was a birthday gift from my wife. I think she was tired of me using old peanut butter jars for a coin stash. The pig has a slot in the top of his head, for inserting the coins, like a normal bank.

I have this bad habit of inserting many coins at once. It saves me time. I never thought that it could go wrong. But it did. As I was adding many coins at once, a penny missed the slot. It rolled off the pig, landed on its edge and rolled off the back of the dresser. Behind the dresser was a 6-gang electrical plug adapter. The penny fell perfectly behind it on the two prongs that settled in the plug behind the adaptor.

I remember my grandmother telling me once that, back in the days before circuit breakers,  people used to replace fuses with pennies when they didn’t want to spend money on fuses. A penny is a perfect size for the fuse socket, was made of copper (a great conductor), and was thick enough to carry more current than the fuse. My grandmother ended the story with the fact that, since pennies don’t blow like fuses, people often had fires that a fuse would have prevented.

This penny, despite being newer and no longer made of solid copper, was still a decent conductor. It provided a loud POP! The sound was so loud (especially with the expletive that I yelled) that I didn’t even hear the breakers trip in the box next to the plug. It pulled so many amps that if flipped the main breaker for the entire house, along with the bedroom breaker.

After I had retrieved the penny, I turned the power back on and took some pictures.

There are soot marks on the wall.  I replaced the outlet and the cover. 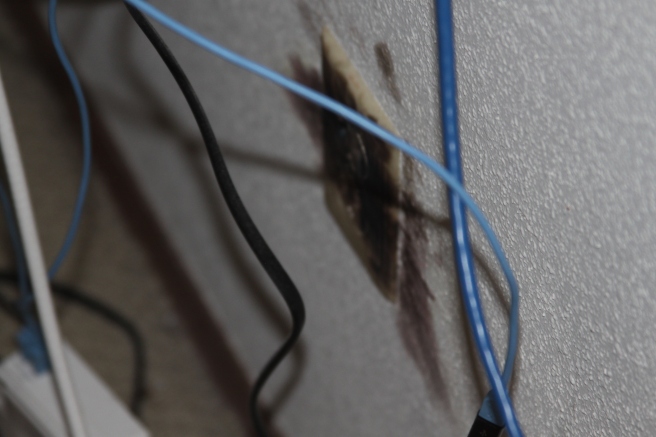 The Penny. You can see where it made contact with the plugs. The short had so much force that it was actually thrown on top of the 6-gang plug.

The 6-gang plug. There’s some melted penny on each of the prongs. This is probably still usable, but I didn’t want to chance it. I replaced it with one that screws into the wall socket so that there’s no space for a penny to slide in.

View all posts by Dan Gregson